We have Drainrock Industries routinely perform maintenance flushing on our drain tile as we get a build up of iron oxide in our drain tile and they are always prompt and professional. We will be calling them again for any future work we need done.

We had a total install of drain tiles and a new waste line. Also a new concrete walk and small back patio were put in to replace the old ones that were removed during the job. Bob's estimate was precise and he kept to it; the job was done on time (actually, ahead of time); the crew was utterly friendly and very respectful of our home; they answered all questions; the work was very professional; and the price was right: I had 4 estimates and Drainrock's was by far the most economical.

They also did the work in a manner that was not disruptive at all. It was a big and potentially messy job but it barely impacted our lives, which was much appreciated because we work from home.

I'd recommend Drainrock in a heartbeat to anyone. Great people.

Bob arrived on time and provided answers to all of my questions. Within a day he sent me a detailed quotation for the required work to be done and we then scheduled a day that was suitable to meet my schedule. The Drainrock team arrived right on schedule and got right to work. I was very impressed with their work ethic and willingness to take time to answer all of my questions. They even made suggestions on how to care for my drain tiles and what to look for in future. My yard was left spotless and you would never know that any work had been done. This is a quality contractor and I would highly recommend them to anyone. Great to hire a quality local, family operated company.

We have had Bob and his crew do a number of jobs at both our home and our business. The crews are professional, the work is always as requested, and they take the time to explain to discuss the project in detail prior to starting. I couldn't ask for a better drainage contractor. Drainrock is always our first call - highly recommended!

We had been wet vacuuming our basement every day for almost 12 years. Two plumbing companies had done costly work to solve the problem - but within weeks, the same problem was back. I was trying to find another company and was impressed by the Drainrock Industries website which I found in the Home Stars list of companies. I was impressed with Bob and his crew. They were here when they said they would and completed the job within a short time. They took the time to explain what was being done & left the property in good condition & no more leaky basement!!! It has been almost 2 years and everything is dry and it is wonderful to not have the worry and water damage. I am so thankful that I found Drainrock Industries and will always recommend them. Michele & Wayne 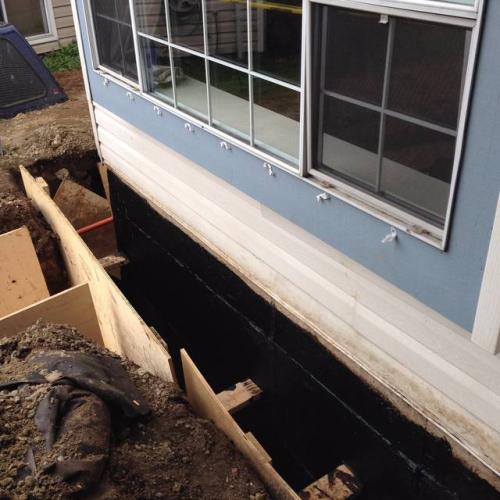 Had water in crawl space. Had several companies come and provide quotes. Everything under the sun was suggested. Cost anywhere from $2500 to over $35,000. All estimates where done by only looking in the crawl space. Called Bob and Drainrock. He came over and inspected the crawl space but suggested that best way to know for sure what was the issue was to blast out drain pipes and stick a camera down and actually inspect the drain function. He also indicated that in this process they would also dig a test hole in the back side of the house to physically inspect drain pipe.

I agreed to pay the $1250 to perform the flushing and camera of drains. What was found was that the product used during the construction of the house was no longer to drain the water away from the foundation of the house. There was also plastic wrap around pipe further preventing the ability of drain pipe to remove water. this was found because they actually dug the test hole to physically inspect drain.

The complete drain pipe needed to be replaced and further crushed rock applied to top of pipe to provide proper drainage.

OK, so a lot of companies can do that. However, you will be hard pressed to find a company that will do it as well and in a manner that truly is a cut above what you would expect.

Starting with Bob who is professional, knowledgeable and respectful. He took the time to explain the process and pros and cons of other types of repairs. He is straight forward and direct.. The staff that came to the house are also amazing. Respectful, hard working and an absolute pleasure to be around.

I was home almost the hole time while the work was being done over two weeks. The team was always working hard and started on time and stopped when promised. This was the case every day. They cleaned up the area at the end of each day only leaving out essential tools and equipment. They were very mindful of the optics the work had on my neighbors and keep the work site as clean and debris free as possible.

Payment was set on completion of tasks broken up in a couple of sections. No monkey business of cash up front etc... This made me feel very comfortable as I knew they would not leave my job to do other jobs until mine was complete.

As for the quote, Drainrock was not the least or the most, however, what helped us choose them was their ability to take the time to actually investigate the reason why water was getting into the crawl space and the several solutions offered with the pros and cons. they also provided a warranty that we thought was very impressive.

In short the work was completed on budget, on time and my yard house were put back in a condition better than we started.

If you are serious about repairing issues with water in your house in mind there is only one company to call. Drainrock.

Also, when you look at the reviews you see all the 10's and you think it must be a trick. Trust me it is not, this company strives to do good work and fair value and most importantly ensure that they have a great name.

During the windstorm in August our neighbour's tree fell and during the insurance company's investigation into the total damage done by the roots, it was discovered our 65 year old terra cotta drain tiles were broken and blocked. After many months of meeting with many contractors whose quotes differed by tens of thousands of dollars, we found Bob and Drainrock. His quote was not only reasonable compared to the others, his professionalism and company presentation was exceptional. The crew arrived and were so polite and friendly, which never wavered even in the the horrible rain and mud they had to endure, that you knew your home was in good hands. They showed respect for the very stressful situation we had been living in for 7 months and tried to make the replacement, and start of re-building, as painless as possible. Dealing with contractors can be stressful, but not with Drainrock. I have passed their name on to many of my friends and will continue to do so. Thank you so much for all the hard work you did!

Bob and the Drainrock team have been first class from the first meeting to review our drain problems. I had received a few 'experts' opinions and estimates prior to Drainrock attending but was not pleased with the outcome of those inspections. Bob attended and laid out a logical plan prior to estimating which required some exploratory work. Based on their recommendations we asked them to continue to complete the entire job. The Drainrock team quickly diagnosed the problems and set out a scope of work and estimate. They show up when they say they will, the invoice was exactly what was estimated and they leave a very tidy job site. We have been extremely happy throughout their entire involvement with the project. Their work is top notch and they are very fair with their pricing. I would highly recommend them to anyone with drainage problems at their home. Make Drainrock your first call! Our drainage project is nearly completed and will not hesitate to call them again for any exterior project they can perform. Bob and his team have performed in a very professional manner from Day 1 and by the end of the project they will finish as friends.

On Sunday evening (November 1) we found 5 cm of water in our entire basement, due to a backed-up sump. I phoned Drainrock that same evening, and a full crew was by 9:00 a.m. the following morning. They worked throughout the day with camera and snake to partially unplug the pipes leading the City drains, so that we didn't need the rented sump pump that night. They returned Tuesday morning with a root-rooter to completely remove the blockages, but also suggested that we should replace the interior sump with an external one. They gave a reasonable quote to do that job, and completed the work in 2.5 days this week. All their crews were on-time, respectful of property, and professional. We are fully satisfied with Drainrock service, especially the quick response to the flood, and recommend them without any reservations.

Our building inspector suggested Drainrock and I'm happy he did. From the moment I spoke with Vanessa at Drainrock HQ I felt confident the recommendation was a good one. Bob came out and walked me through some thoughts and options on our 105 year old house with a leaking basement. He suggested an exploratory dig near where the water was getting in, with a hydroflush if needed. All that work was done professionally by Bob and Vanessa's son Rylan and team. They were on time, polite, hard working and thorough. We ended up in need of a sump, pump and back up.

Again Bob walked us through the reasoning behind them and suggested a company to do the install.

If ever I need drainage work done, or if ever I'm asked for a recommendation it would be Drainrock and ONLY them.

Thanks to Chris at Haystack for the recommendation.