Drainrock Ind. replaced our perimeter drain system. HomeStars and Shell Busey web sites gave great reviews on Drainrock. The job was completed on time and price quoted. The hard working crew took time to answer all our questions, were polite, friendly and knowledgeable. The warranty also a plus. They did fantastic work and we highly recommend them.

We had a small problem. The tie-in of a roof downspout to the perimeter drain system was clogged. It only took Barb 1 hour to excavate , cutout the clogged tee section of the perimeter drain, clean the adjacent drain pipe, install a new PVC Y section, tie - in to the downspout, backfill and cleanup.

I was very pleased with the work and the price. Our neighbour had some French drains installed in his front lawn the same day.

I'm a retired civil engineer and was very impressed with the work. Drainrock is a very efficient, professional group and I highly recommend them 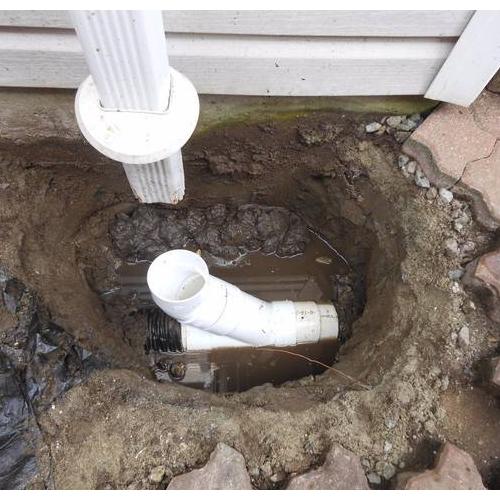 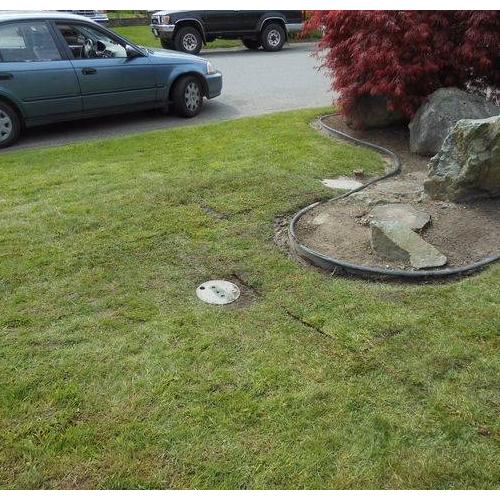 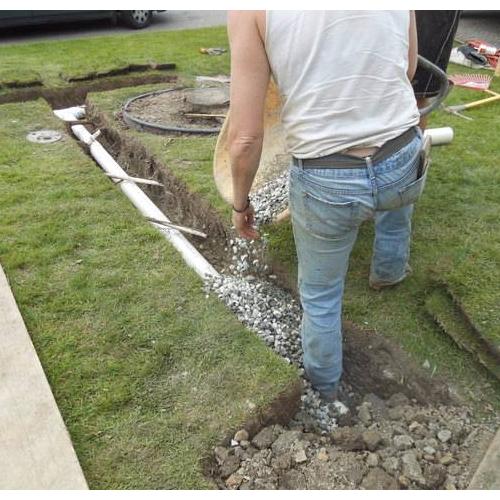 We have had lawn drainage issues for some time. Lawn was always spongy to the point it could not be cut. got many quotes they were the cheapest by far which is not always good. They showed up on time the day they were supposed to. Work was done efficiently for the exact quoted price and the job was so clean we did not know they had even been there. What's more the water issue has been solved. I would highly recommend Drain rock. They are really great. Thanks

I live in a 50 year old house in Ladner and drainage around my house has been an issue for years due to clogged drain tile failing to work properly. I contacted several companies to request a quote to replace the entire drainage system and I chose Drainrock for several reasons. Drainrock received favorable reviews from HomeStars, Better Business Bureau and Shell Busey's House Smart Web sites. They responded promptly to my query, attended my home, answered my questions and within days, provided a quote. When work started, I took a day off work to monitor the progress and I have to say I was impressed with how hard the crew worked to get the job done. At one point, the crew identified an issue with connecting to the city system. The owner called to explain fully what the issue was and I was happy to know they were exploring the issue with city representatives to ensure the job was done right. This only delayed the job by a day but I was happy with the action they were taking. At the conclusion of the project, everything was put back as it had been and the owner followed up with a phone call to let me know. I'm happy I chose to go with Drainrock and I would happily recommend them to others.

I found Drainrock thru homestars and I was not disappointed. The company is a family owned and run business. Both Bob and Vanessa were a pleasure to deal with. They answered all my questions, the crew showed up on time and everyone was very professional and friendly. Included in the invoice was a detailed description of what was found when they did the hydro flush. I will be calling them again when it is time to have the drains cleaned. Thank you

After a very heavy rain last month we discovered a water leak in our basement and tried to determine on our own the source of the leak. We have a finished basement so it was hard to determine the source of the leak from the inside without cutting into our bathroom tile and also cutting into our drywall. We called Bob at Drainrock and he came out the next day to our house and offered us advice and direction on how to best determine where the water leak was coming from. There was no high pressure sales from Bob just straightforward advice and a reasonable quote for the excavation and concrete foundation repair work required to stop the leak..........The repair work was completed this week by Drainrock’s repair crew. It was a very cold day but the entire Drainrock crew was here all day and they were all extremely polite, friendly, and hardworking and they were careful to protect our garden and clean up everything after they were finished. I would highly recommend Drainrock to anyone that is trying to repair a leak in their house cased by problems in their concrete foundation.

They were very good. We would recommend them. They came over and we were going to have a new sidewalk put down beside the house. Before we had the concrete, we wanted to make sure the drains were clear. Bob came when he said he would and they took a look and gave us a DVD of what the camera saw when it went through the drains. When they came back and examined the drain pipe, they found that it wasn’t plugged. We just got charged for the examination. We found them very pleasant to work with.

What they did for me was definitely great.. There was a leak inside our house from a crack in the foundation. They fixed it. We also had a leak in the basement stairwell that we had been struggling with for 15 years-- they also fixed that. They brought in another excellent company to replace the stairs after all the drainage was replaced and repaired. I don't worry when it rains now!! We were extremely happy with them and I would highly recommend them.

They cleaned the drain tiles with the high pressure system that they had. It worked very well. They are a very company. I would give them the highest rating all around.

I found them on a radio station on a call in show for home improvements. They called within half an hour. They told me what they offered and I told them to come by and take a look. They found the problem within an hour. There was a clog. They came back when they said they would and they did a wonderful job. They cleaned everything up and so there was no mess. They knew what they were doing. I absolutely would recommend them. They are wonderful to work with.